The ancient spice, the staple recipe and the life story of Rana Keilany, a Syrian architect turned chef in Omaha, Nebraska.

Syrian spices is a blend of allspice berries, black pepper, cinnamon, nutmeg, coriander, and cloves. As in any blend, the portions of the core spices can differ, but allspice contributes the most to the power of the blend. In some cases, ginger is added to the mix – that’s seven different spices that make Baharat, the Arabic word for spices.

The blend originated in Aleppo, Syria, a city located on the spice route or silk road between Asia and Europe and known as the center of gastronomy of the Middle East. It’s easy to create your own blend at home – adding spices or reducing portions to your taste, but you can as well buy it at any Mediterranean grocery store.

Rana Keilany was an architect in Syria, but adapted her skills when she moved to Nebraska, U.S.A., in 1997. Engaged in her husband’s international grocery store in Omaha, now closed, and influenced by her mother’s cooking, Rana picked up food catering as her American career. Today, she runs the Rana’s Cuisine company, specializing in Middle Eastern recipes.

I would like to thank the American Muslim Institute, part of the Tri-Faith Initiative in Omaha, Nebraska, for facilitating this interview. You can learn more about them by checking their websites.

Preparation:
Start by frying nuts in a pan, thinly layered with cooking oil. Stir and toast them for about three minutes; put aside. In the same pan, brown the ground beef or your preferred meat, and then add onion. Sauté for a few minutes, adding salt, pepper and little bit of Syrian spices. Let it cook/sauté for a few additional minutes.

Cook rice as per direction, then mix it with ground beef, peas and a little bit more Syrian spices. Save a couple of spoons of ground beef and peas for layering the ouzi. Prepare the phyllo dough, but make sure to cover it with a plastic wrap and damp cloth on top of the wrap to prevent drying.

To create ouzi, use a mini glass pinch bowl, like the ones used for dipping – about 3.5 inches in diameter. Drape one layer of phyllo dough by pressing it down, but first, layer the bowl with ghee or butter so the ouzi slides out easily. Use a second layer of phyllo dough and place it perpendicular to the first one, creating a cross-like shape.

Start building ouzi by first placing a few nuts as the first layer, and then adding a few peas, a bit of ground beef and lastly the rice mixture all the way to the top. Wrap the dough layers to cover the filling and turn the bowl upside down. Place the dome-like ouzi on a pan layered with ghee, and then again brush some more ghee on top of ouzis. Be generous with butter or ghee to prevent burning of phyllo dough.

Preheat oven to 450F and bake ouzi for about 15-20 minutes or until golden. Serve with yogurt or tzatziki sauce. 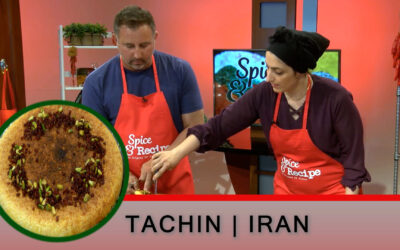 Iranian cuisine is among the world's few that still uses barberries. Nushin Musavi, made Omaha home and chose Tachin... 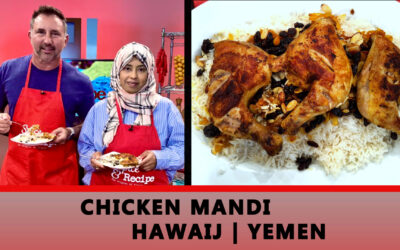 A flavorful blend of spices just like the life of Amal Alexander, a native of Yemen, a mother, a teacher and a book...