Immigration has a shot at change. If President Biden is successful in getting his U.S. Citizenship Act approved by Congress, it will be the first big change in immigration policy in decades.

It’s not that past presidents, senators and representatives haven’t tried their hand at reform. They just haven’t been very successful.

Pew Research notes that the last sweeping immigration bill was passed more than half-a-century ago. The Immigration and Nationality Act of 1965 changed the quota system that gave 70 percent of U.S. visas to people of three countries – Ireland, Germany and the United Kingdom. The new allocation system spread those visas around the world and gave priority to close relatives of U.S. residents.

Since the 1980s, concerns about unauthorized immigration have guided the nation’s immigration policy agenda, according to Pew Research.

In 1986 during the Reagan Administration, Congress passed the Immigration Reform and Control Act, which focused on amnesty and enforcement. The Act offered temporary protection from deportation and legal permanent resident status to millions of people who had lived in the country since the 1980s. Roughly 2.7 million people living in the United States were given legal status under the law’s general legalization or its special program for farmworkers, according to Pew Research.

Then in 1990, the Immigration Act of 1990 increased the number of visas for legal immigrants coming for family and employment reasons and created a new category of visas for “diversity immigrants.” It also created a new type of relief from deportation for nationals of countries undergoing armed conflicts, environmental or health disasters, or other “extraordinary and temporary conditions,” known as “temporary protected status,” which has been used mainly by Central American immigrants.

The Center for Immigrant Studies, a hub of independent, non-partisan research, states the last time Congress passed an amnesty bill was 21 years ago. The Legal Immigration Family Equity Act of 2000 targeted the long line of illegal aliens who were waiting to become green card holders through marriage, employment or other categories.

But nothing greater in recent history has influenced attitudes on immigration than the Sept. 11, 2001, attacks. The terrorist-controlled planes that crashed into New York’s Twin Towers, the Pentagon in Washington, D.C., and a farm field in Somerset County, Pennsylvania, sharply affected the public’s perspective on immigration. Twenty foreign-born terrorists were involved in the attacks that took 2,974 civilian lives. The terrorists had entered the country on tourist or student visas. Four of them, however, had violated the terms of their visas and became illegal aliens. The attack exposed long-standing holes in the immigration system that included failures at visa processing, internal enforcement, and information sharing.

Since then, Congress has proposed a myriad of bills aimed at securing borders, tightening enforcement, creating pathways to citizenship, and increasing immigration. Almost all floundered and failed because of political divisions or public pressure, according to the Center for Immigration Studies.

In December 2005, the House passed the Border Protection, Anti-terrorism, and Illegal Immigration Control Act, which was limited to enforcement. Six months later, the Senate passed the Comprehensive Immigration Reform Act giving amnesty to a majority of illegal aliens already in the country as well as increasing legal immigration. No compromise bill emerged, so they both died.

The next year, the Senate again embraced amnesty legislation, but it too died because it was unpopular with the American public.

In a 2012 executive order, President Barack Obama created protections for about 700,000 illegal aliens who arrived in the country as children. The Deferred Action for Childhood Arrivals, or DACA, created renewable, two-year grants from deportation, along with work permits and identity documents.

The following year, a bipartisan group of eight senators drafted amnesty legislation, providing a path to citizenship for 11 million illegal aliens in the country, including the DACA recipients. But the bill was not taken up by the House, so again, it died.

A second executive order by Obama in 2014 attempted to extend protections against deportation to the parents of American citizens. The Deferred Action for Parents of Americans, or DAPA, would have created three-year, renewable work permits and exemption from deportation to illegal aliens with children who are American citizens or lawful permanent residents. This order was blocked by a temporary injunction after multiple states filed lawsuits against the federal government.

During Trump’s term in office, immigration rose in prominence as a national issue. In a Gallup poll in July 2018, 22 percent of those surveyed named immigration as the country’s most important problem, the highest percentage in the 80-year history of asking that question. At the same time, 81 percent of respondents said they support a path to citizenship for immigrants in the country legally.

Congress tried to pass a couple bills in 2018 that would have preserved DACA, created a path to citizenship, and provided amnesty to more than 2 million illegal aliens. Again, neither survived.

← Prev: U.S. Immigration Act of 2021: Biden's proposal to overhaul the immigration system Next: The outcome of Trump’s approach to immigration and the likelihood of Biden's immigration bill to become a law. → 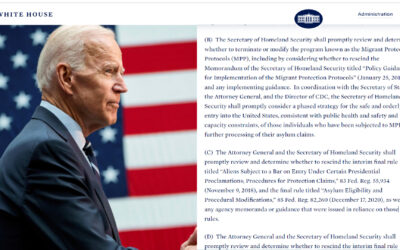